Why is positivity important? Until the 21st century, it wasn’t. We have a revolution in our midst. Positive psychology is the new kid on the block, facing off against 100 years of diagnostic psychology.

Science is quantitative. What the science of happiness asks is whether there is one number that will determine if a person is happy? “If you have this much A, you should be happy?”

Since 1999, American science has sought to answer stuff like “what is happiness?” “can we change our happiness levels?” and “how much money do I need to be happy?”

Modern psychology lends serious attention to questions such as “what is happiness?” “can we change our happiness levels?” and “how much money do I need to be happy?”

At the same time, it would be unfair to describe traditional psychology as “negative.” There is no such thing as “negative psychology.” “Negative,” in this case, simply refers to focusing on mental disorders and diagnosing the mentally ill.

Amount of money you need to be happy

We have known for over a decade that there is a sort of perfect ‘happiness’ salary, but more recently, a 2018 study from Purdue University used data from the Gallup World Poll to find that the ideal income point for individuals is $95,000 for life satisfaction and $60,000 to $75,000 for emotional well-being

A majority of normal people will tell you they go to therapy every week or two without a trace of shame. The future of psychological therapy will be much more “normal.”

The whole point of a psychologist is s/he isn’t supposed to judge you, yet when you walk out of a therapists office in 2020, you often leave with a prescription sheet that describes you to a sharply uncomfortable degree.

Something has to give.

The cool thing about the recent developments in psychology is how ambitious they are. Our generation wants more. Avoiding unhappiness is not enough anymore, and it is not likely to return to being enough in the near-future. Recent developments in psychology have moved away from curing diseases and toward studying happiness, thriving, and satisfaction.

Learning psychology doesn’t have to happen in a classroom. It is enough to enroll in an online course.

British thinktank Demos came up with the term “pro am” to describe the surging new demographic of amateurs with professional abilities sourced from the internet.

Think of the guys who learn to build a car from YouTube.

By 2050, there will be millions of psychology pro ams who take their mental wellness into their own hands.

The most famous “treatment” to come from positive psych has to do with gratitude. We call positive psychology treatments “keychains” since they are like keys that unlock a stronger and happier life.

+ Happiness and Spirituality | The Gratitude Keychain

This is a deceptively simple practice. The Oxford Handbook of Positive Psychology says that it leads to six months of increased happiness for both parties, on average.

You just write a one-page thank you note to somebody who wouldn’t expect it and then read it out loud to them.

This practice is reported to disconnect us from toxic, negative emotions. The study found that gratitude keychains also brings both parties an increase in measurable Spirituality.

+ Intimacy at Home | The Response Keychain

Do you and your partner sleep together less than you used to? Does fighting seem unavoidable? Believe it or not, there’s an easy trick that is EVEN MORE effective at solving these problems than roses and chocolates (although a little romance doesn’t hurt!)

It is called active constructive responding or the Response Keychain 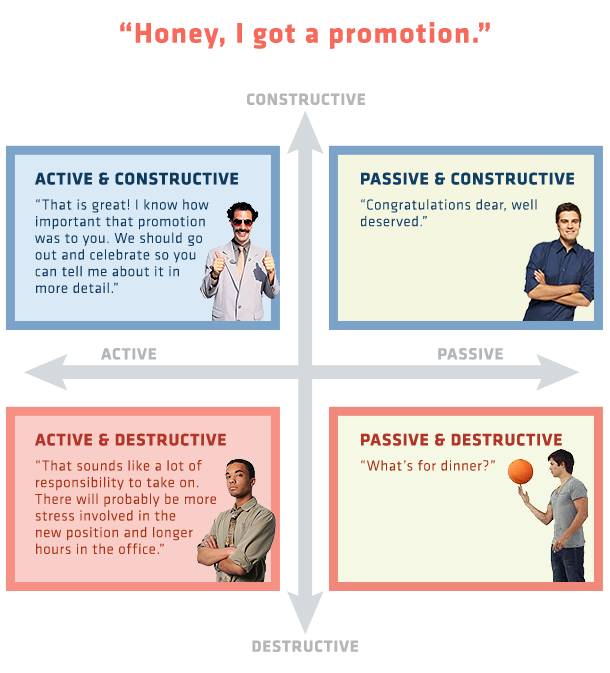 This is a technique for being a better listener.

When our partner comes to us with good news, it turns out that getting excited for her and responding with enthusiasm is only the SECOND best way to respond. The FIRST BEST way to respond is by bringing her back to that exciting moment.

For example, if your boyfriend tells you he wrecked a top-ranked player on Call of Duty, your goal should be make him feel as close to the initial feeling of triumph as possible. I might say: “What map was it on? What guns were you guys using? You should make a Twitch account and get a milli subscribers!”

+ Productivity in your Routine | The Laughter Keychain

Corporate team-building events don’t have to be like pulling teeth. Laughter Games with your office mates can bring everyone closer and bring physical benefits for the entire office’s well-being. The Laughter Keychain consists of a new kind of office games designed to disinhibit colleagues and bring teams closer together.

Laughter is the physical manifestation of joy and well-being. It’s a discharge of raw positive energy that can be defined as a psycho-physical reaction.

Expect a ton of research into how positivity affects the brain. The science of the mind will enhance positivity in the workplace

According to former APA President Martin Seligman, subjective well-being is made up of three balances that we must maintain to develop deep, lasting satisfaction and to thrive in general.

refers to basic pleasures that come from the senses.

refers to discovering and routinely using your personal strengths and virtues to enhance your life.

Example: A depressed cashier who scores very high on Social Intelligence rearranges his priorities and habits so that his personal goal becomes making every customers’ interaction with him the highlight of that person’s day.

Have you heard of these theories before? Drop a comment and let us know.

Many psychology aficionados like myself get too hung up on fallacies and disorders. This way of looking at the science of the mind makes it easier for us to accept ourselves as we are — equally equipped with Strengths and weaknesses.

Our mission is to create better normals. You in?

2 thoughts on “What is Positive Psychology and Why is it Important?”

Do you want to learn about the science that redefined ‘intelligence‘?

Juan Alejandro Lozano is the author of Poetry From The Future, an artbook that combines poetry and positive psychology. You can find him on social media with the handle@Dro.Verse

Topics That Ignite Us